Born in Pasadena, California, and raised in nearby Costa Mesa, Dan Barrett began playing the trombone at the age of eleven, and the cornet shortly thereafter. In high school he formed his first group, the Back Bay Jazz Band. This sextet presented the music of King Oliver, Jelly Roll Morton and other early jazz greats to Southern California audiences. During this time, Dan played many local jobs with the great New Orleans musicians Ed “Montudie” Garland, Alton Purnell, Mike DeLay, Joe Darensbourg, Nappy Lamare, and Barney Bigard, hearing about the “old days” first-hand.
In 1977, Dan made the first of many trips to Europe, to appear at the Breda International Jazz Festival in Holland. Many passports later, he has become a welcome guest at dozens of jazz festivals abroad, and has formed close friendships with many musicians overseas.

Dan and his wife, Laura, moved to New York City in 1983. He spent a busy couple of years touring with and writing for the Widespread Jazz Orchestra, and later was a frequent guest at Eddie Condon’s jazz club and other Manhattan night-spots. It was at Eddie Condon’s that Benny Goodman first heard Dan play, and shortly thereafter asked him to join what would be the King of Swing’s last orchestra. While in New York, Dan also co-led the popular Howard Alden – Dan Barrett Quintet (the ABQ).Dan has played both valve and slide trombones for many motion pictures, including Cotton Club and Brighton Beach Memoirs, as well as Woody Allen’s Mighty Aphrodite, Everyone Says I Love You, and Bullets Over Broadway. If you look fast, you can see Dan on the screen in the latter film. (He’s featured a bit more in the movie Wild Man Blues. This award-winning film documents a three-week tour of Europe by Woody Allen’s New Orleans Jazz Band). Dan has performed five times at Carnegie Hall: with Woody Herman (and the New York Pops Orchestra); pianist (and legendary raconteur) Joe Bushkin; in two tributes to Louis Armstrong; and a command performance for Mr. Bulgari of…well, BULGARI.

Additionally, Dan composed and arranged the theme music for the American Playhouse television production of Rocket to the Moon, and Christopher Munch’s motion picture The Sleepy Time Gal, starring Jacqueline Bisset. Dan still finds the time to appear at numerous jazz parties and festivals throughout the United States, Canada, Europe, the United Kingdom, Australia, and Japan.

Dan has recorded under his own name, and with many respected jazz artists. A partial list includes Doc Cheatham, Scott Hamilton, Bob Haggart, Rosemary Clooney, Ruby Braff, Joe Bushkin, Jay McShann, Buck Clayton and Benny Goodman! Dan is especially proud of his associations with Messrs. Clayton and Goodman, for each of whom he played lead trombone and was a featured soloist.
In addition to his free-lance activities, Dan continues to pursue his interest in arranging and orchestration. One of his more ambitious projects was scoring the St. Louis Blues for jazz band and symphony orchestra. His writing can be heard on many Arbors Records CDs, including I Saw Stars, Moon Song, and Blue Swing, all featuring vocalist Rebecca Kilgore, and Look What I Found, with vocalist Daryl Sherman. An earlier recording (for another label) arranged by Barrett and featuring the late, great Bobby Short, garnered a Grammy nomination.

Still another CD occasioned this comment from the late John S. Wilson (jazz reviewer for The New York Times): “(He) is one of the delights here, a melodist, a colorist who knows how to use a plunger mute with taste and, in total, a player Duke Ellington would have loved.”

Dan was nominated for the Bell Atlantic Jazz Award for “Trombonist of the Year,” and came in on top in a Mississippi Rag poll as its readership’s “favorite living trombonist!” He is mentioned with high praise in the new Biographical Encyclopedia of Jazz (by Ira Gitler and Leonard Feather), as well as the Guinness Who’s-Who of Jazz.

Dan also enjoys his status as an “Infrequent Correspondent” for The Syncopated Times. TSP is the best source for news about today’s world of traditional jazz and swing.

Dan continues to make friends and fans at his numerous appearances at festivals and jazz parties both in the USA and abroad.

Dan likes to remind prospective festival and jazz party producers–and even folks who would like to have a fun and exciting jazz group for their private party or event–that he and his swinging friends are “only an email away!” 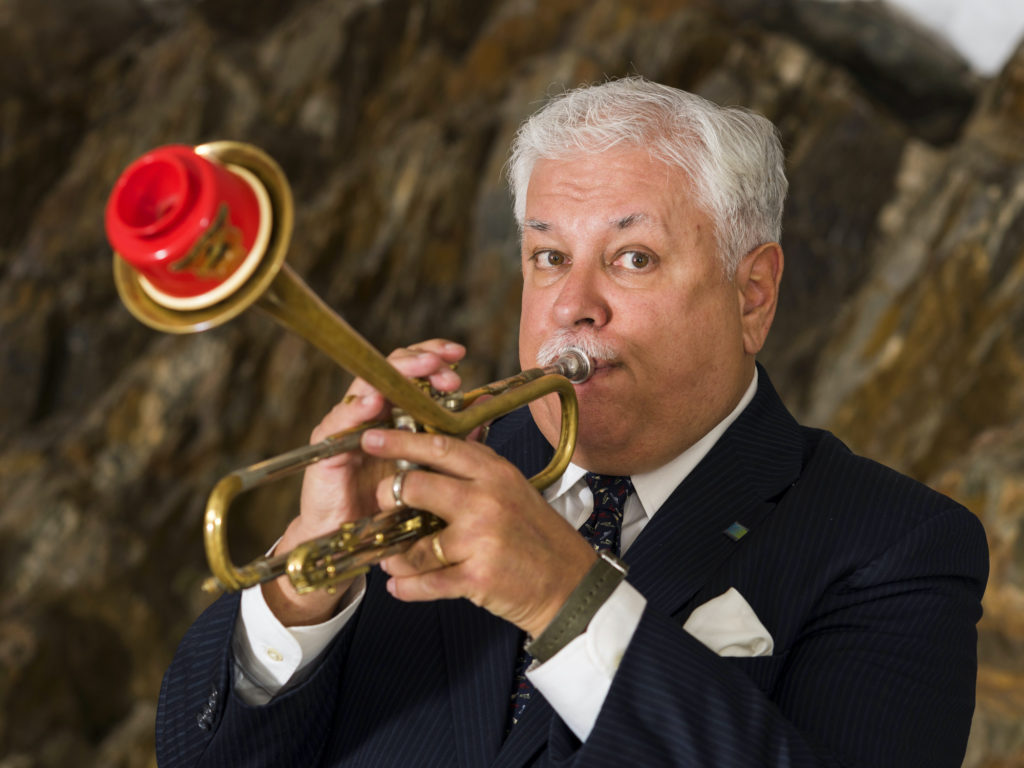